Professor Alan Male is an illustrator, writer and academic. He directed the illustration course at Falmouty University between 1993 & 2010 leading it to an international distinction for excellence. He was promoted to Professor and is a keynote speaker on the international stage. He is the author of 'Illustration: A Theoretical and Contextual Perspective', a recommended textbook it has received excellent reviews. His second book, 'Illustration: Meeting the Brief' will be published in 2014. He has extensive experience in publishing and advertising having illustrated more than 170 books and winning numerous awards including Gold from SILA and a Texas Bluebonnet for children's books. He also has work in New State Museum's permanent collection where he has won the critically accaimed Focus on Nature Jury Award three times. He is an authority on research, science and knowledge bearing imagery. 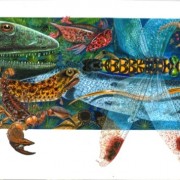