Bartosz Kosowski - born in 1979, is an illustrator and poster artist based in Lodz, Poland. He has graduated from Strzeminski Academy of Fine Arts and Design where he studied traditional printmaking as well as University of Wroclaw. For the last fifteen years he has been creating award winning posters, editorial illustrations and portraits and has cooperated with such clients as Apple, LucasFilm, Disney, HBO, Canal+, Netflix, Legendary Pictures, „The New Yorker”, „The Economist” „The New Republic”, „The Hollywood Reporter”, “Entertainment Weekly” and „Politico”. He has received four gold and one silver medal from Society of Illustrators (both New York and Los Angeles). His works have also been selected and awarded by World Illustration Awards, New York Festival Awards, American Illustration, Spectrum, Communication Arts, 3×3, Graphis, Polish Graphic Design Awards and European Design Awards. They have also been published in by Taschen, Abrams, Huginn & Muninn and Bloomsbury. For the last eight years he has been an Adobe Design Achievement Awards mentor. 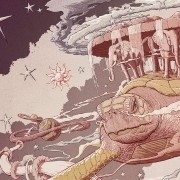