Priscilla started drawing in middle school in order to depict the characters of her fevered imagination, but only made the plunge to pursue it as a profession nearly fifteen years later, after touring through anthropology and video game production first. She finds herself drawn to depicting heroines and faces, as well as the struggle to encapsulate a story in a single image. 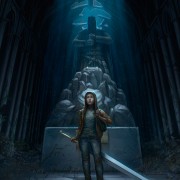