Be careful what you say to your children. Watching Ray Harryhausen’s Jason and the Argonaughts with his father, four year old Chuck Grieb asked how the skeletons “came alive”. His father’s answer, “They got skinny actors” led the boy to a quest for the truth and a lifelong love for film and animation; by the time he was seven he was working on his first Stop Motion Animation model. Having completed his MFA in film production at the University of Southern California; Chuck has worked for Disney, Nickelodeon Studios, Film Roman, as well as various other animation studios. Employed as both a traditional and digital artist; Chuck has filled roles from design, to storyboarding, to animation. A member of Society of Illustrators Los Angeles and SCBWI , Chuck has been exploring illustrative art, his work having been featured in esteemed publications including Spectrum: The Best in Contemporary Fantastic Art, ImagineFX, Infected By Art, and Exposé. 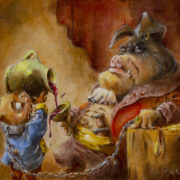 Portrait of a Goblin Chieftain 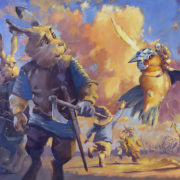 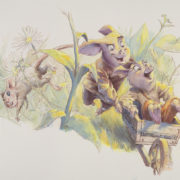