Born in 1961 in Queens, NY, Lisa Rothstein was told by Depression-Era parents that she'd be "out on the street selling pencils" should she pursue a career as a cartoonist. This led to a job as a copywriter at the ad agency Young & Rubicam New York after graduation from Brown University in 1982. She quietly pursued her cartooning on the side, taking night classes from New Yorker cartoonists as she worked with brands like IBM (recruiting Hagar the Horrible's Chris Browne for one long-running award-winning print campaign). Today Lisa freelances as a live sketchnote artist, brand strategist and a cartoonist whose work has appeared in The New Yorker, several bestselling books, and marketing campaigns. Lisa lives in San Diego, California. She enjoys using pencils, but so far has not been seen selling any. 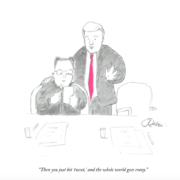 Then You Hit Just Tweet, and the Whole World Goes Crazy