Mary Jane Begin is a Senior Critic in the Illustration Department at the Rhode Island School of Design (RISD), and serves as the Internship + Professional Development Advisor. Her latest teaching venture includes the Foundations of Color series, and Artist at Work series of on line video courses with Lynda.com. Based in Rhode Island, Mary Jane is an award-winning illustrator and author known for her acclaimed picture books; Little Mouse’s Painting, A Mouse Told His Mother, The Sorcerer’s Apprentice and Willow Buds, tales inspired by The Wind in the Willows, a classic tale that she also illustrated. Mary Jane wrote and illustrated her latest picture book, My Little Pony, The Dragons on Dazzle Island as well as My Little Pony, Under the Sparking Sea published by Little Brown and Company in collaboration with Hasbro. Her client list includes Hasbro, Celestial Seasonings, Mead Johnson and Disney. She is the recipient of many awards, including the Steven Donahos Award and multiple Certificates of Merit from the Society of Illustrators, multiple Awards of Excellence from Communications Arts, the Irma Simonton Black Award, and the Critici Erba Prize at the Bologna Book Fair. Her work has been exhibited throughout the country with one-woman shows in New York, Beverly Hills, the National Museum of American Illustration in Newport and the Rhode Island State House. She has also exhibited at the RISD Museum, the Society of Illustrators (NY), The DeCordova Museum, and Storyopolis in LA. 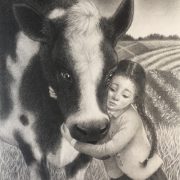